How to Split and Join Large Files- Download File Splitter

Here is a program that is not only able to split or join files, but can do so in a timely fashion, and is available for all versions of Windows..

FFSJ is available in two versions; either the Lite version or Standard. The Standard version has all the features of the Lite version, but also includes support for integration into the Windows Explorer shell context menu. Both versions of the program will fit on floppy disk.

Joining
For the splitting process, you can set the number of parts that you wish to divide the source file into, to evenly divide them, or divide after a certain file size, as well as to delete the source file after splitting and password encrypt the data being split. With the Standard edition of FFSJ, you can select Split from the right-click context menu. 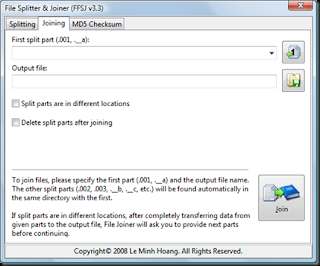 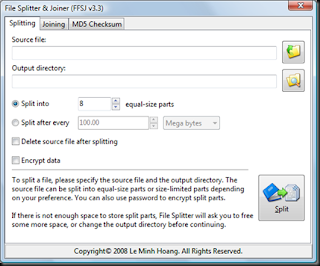 In either the splitting or joining process, you can drag the respective files into the appropriate tab within FFSJ to automatically create the source path for that file and in the case of joining split files; enumerate any related files in a drop-down menu list, which can be selected as the start file for joining.

Other Features
FFSJ includes support for the generation of MD5 hashes that are useful in comparing a file (after say; transit via the Internet) to the file’s original source by seeing if the hash numbers generated for each match, thus proving both files to be of identical integrity. With the Standard edition of FFSJ, you can select MD5 Hash from the right-click context menu.

Here is the URL for this
FFSJ